So, as promised, here is a look around Mishima Taisha. I apparently had the same idea as everyone else in the city, which was to go take pictures of the sakura (SAH-koo-rah, not suh-KOO-ruh) as they were at their peak bloom and just beginning to fall. I went fairly early in the morning, and so I got breakfast at the shrine.

I’m not sure what exactly it was, but it was basically rice, battered and fried on a stick, and then doused in mayo, soy sauce, and green onions. It was DELICIOUS. (It was also probably terrible for me, but this was the day that I learned that shrine food seems to be pretty much the same as fair food in the States- mostly fried, and kind of expensive.) 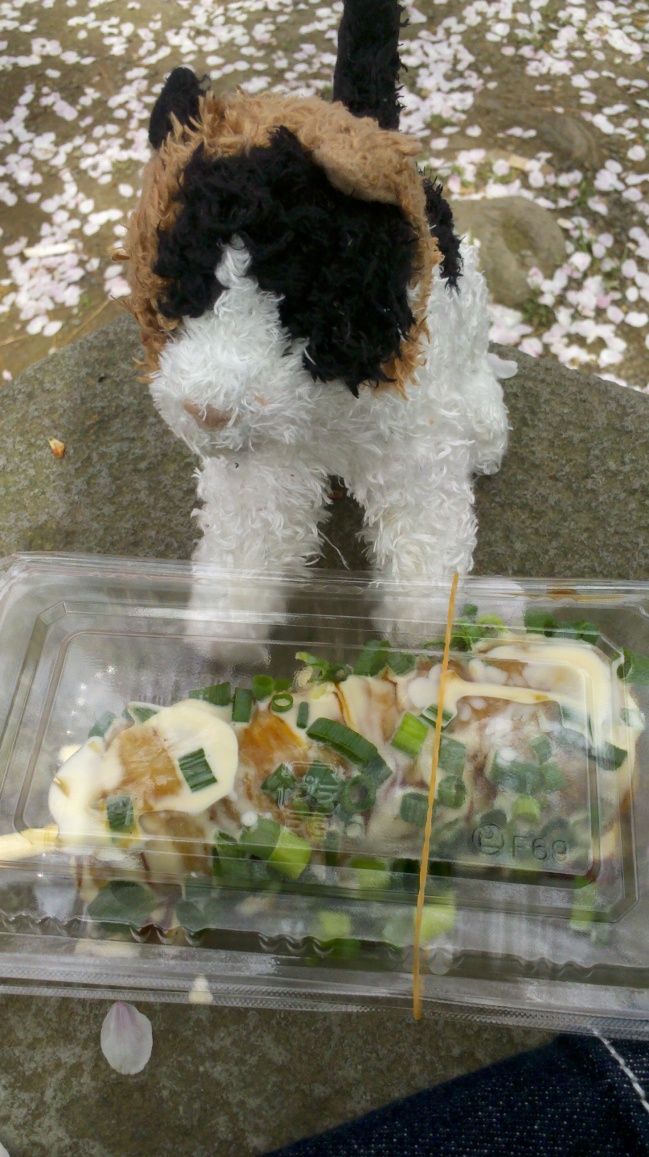 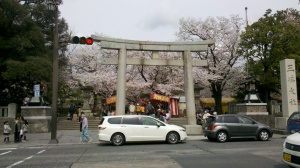 This is the torii gate at the main entrance to the shrine. From what I understand, passing through a torii gate has a purifying purpose, much the same as signing oneself with holy water at the entrance to a Catholic church. There is also a fountain sort of thing just inside with long-handled cups to wash your hands and mouth (again, purification before entering a holy site), but I didn’t get a picture of it. 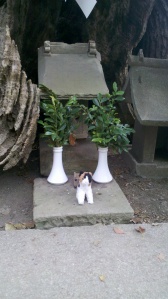 This is a little shrine in the base of a really big old tree. 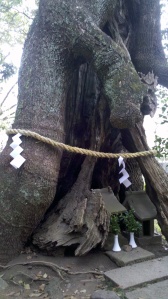 This gives you a slightly better idea of just how big this tree is. It’s fricking huge. 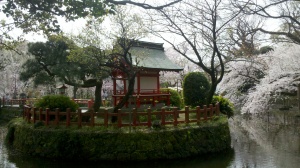 Little island in the middle of the lake with another shrine in it. For clarity’s sake, all of these littler shrines are within the boundaries of Mishima Taisha. Again, I’m using a Catholic church analogy, because it’s the most similar thing I can think of that will be even vaguely familiar to most of you- it’s kinda like how inside one cathedral, there can be lots of different little areas of to the sides in the main sanctuary in which one can pray. 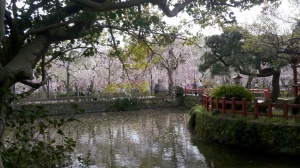 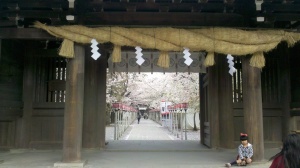 View down the path into the main shrine, as well as a tired little girl. 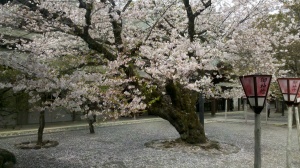 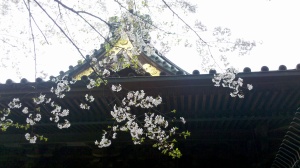 View of some of the roof of the main shrine as seen through cherry blossoms. 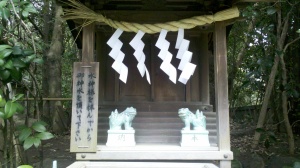 This shrine was in an out-of-the-way spot by a little creek meandering through. The inscription reads: 水神様を拝んでから御神水を頂いて下さい。

Trying to translate the honorific speech sounds really artificial and forced in English, so I’m just going to tell you that it’s written very respectfully and you all can fill that in for yourself. Basically, it says that after paying your respects to the God of this shrine (which seems to be dedicated to this particular stream, so I’m guessing it’s a local deity), you can have some of the holy water/water belonging to the God. (I’m not sure how to translate that particular bit, since it’s just the kanji for “God” and “water” right next to each other. Ah, Japanese.) 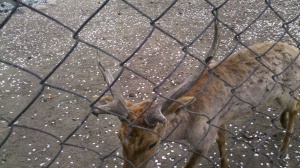 Here is one of the deer that live in the shrine. Sadly, their enclosure is not nearly as nice as the one that the deer in Nara have. 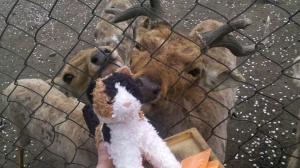 They’re after the deer treats I’m feeding them, not Adventure Cat. 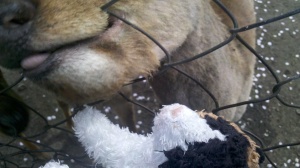 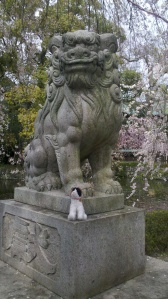 They said I could be anything when I grew up…

Sorry for not posting these sooner; there were a lot of pictures to go through from this trip. In the time intervening, I have also gone to a ramen shop, and ended up spending most of Easter (because it’s already been Easter over here) wandering around Mishima Taisha again. It’s much quieter there today, and it looked like they’d had some sort of ceremony there too- there was water around the entries to a lot of the shrines. 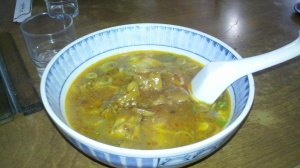 This is an example of ramen in Japan.

I also successfully took a bus (after about three tries), discovered that Japan has Baskin Robbins (will definitely be back for ice cream sometime), and found Meryl Streep’s Japanese doppelganger. 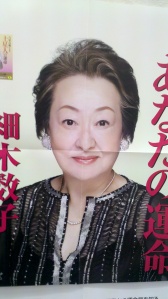 In other news… it’s been chilly and rainy again, the Japanese McDonald’s has a burger with teriyaki sauce, mayo, lettuce and a fried egg (a Teritama burger) which is quite tasty but very difficult to eat without making a mess, by virtue of all of the sauce… and that pretty much covers my last couple of days.

Tomorrow, I get to start registering for classes! Whee!